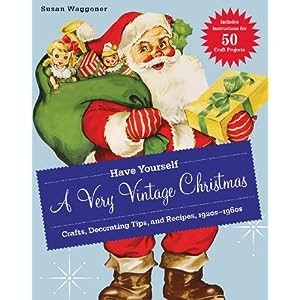 I recently checked out a couple of books by Susan Waggoner about Vintage Christmas. In the book Have Yourself a Very Vintage Christmas  Waggoner goes through the decades form the 20's to the 60's and talks about the different trends and historical changes to the Christmas tradition. I really enjoyed reading it and learned a lot. I will say though that I think Waggoner is a little out of touch with some things since she grew up in New York and I assume she is using her and her families experience as well as magazines of the time. Most of the country was not quite as sophisticated or got trends at a later date. My mother and I looked at it together and she made this observation.

My favorite part of the book is the author going through and talking about the different trends in Christmas cards and decorating  I've always been so aware of motifs or whatever they would be called. I noticed them and sought them out when no one else I knew did.

Thanks to this book, however, I found out a lot more about which objects were trendy for postcards and greeting cards for each decade. This is very helpful to me in dating them, since they often don't have dates on them. Mostly my hunches were right, but it's nice to know the reasons why.

For example, many of the Christmas postcards I find have old Dickens style images. These were very popular in the 1920's. The war was finally over and people wanted to think about the simpleness of the olden days. Because of this desire for an "old fashioned" Christmas the popular images of the time were Dickens style street scenes, lanterns and old style lamps, hearths and candles (the Christmas tree doesn't really become popular on Christmas cards until the 1950's). The colors popular in the 1920's were very unconventional and became more so as the decade progressed. Red was very popular, but green was seldom seen. There was lots of metallic gold and many cards were multi-colored. At the beginning of the decade the colors were often in pastel hues. However, as the 1920's roared along the colors just got brighter and more vibrant. I find the cards from this time so captivating. Children were a popular icon from this time and were shown way more than Santa.

I hope you liked learning a little more about the Christmas trends from the 1920's. All of these cards are available in my Etsy shop.

Posted by PonyBoy Press at 4:02 PM