I hope your summer has been good. August is so close and it seems hard to believe. I have done some summery stuff, but never as much as I want to. Right now I really need to buckle down and work on my zines for the zine sympoisum. Last year at this time I was doing my zine about postcards.

Last week I got to help out two different couples who were planning a wedding very soon and they wanted a guest book of all vintage postcards that people write messages in and then place in a mailbox. It was so fun to pick out ones that were pretty and appropriate. One of the couples wanted 160 with a general theme of travel. I got a mix of mid-century and early century, photographs and illustrations. I think the collection was a nice variety of pretty and kitschy. Here is picture I took before I sent them off. 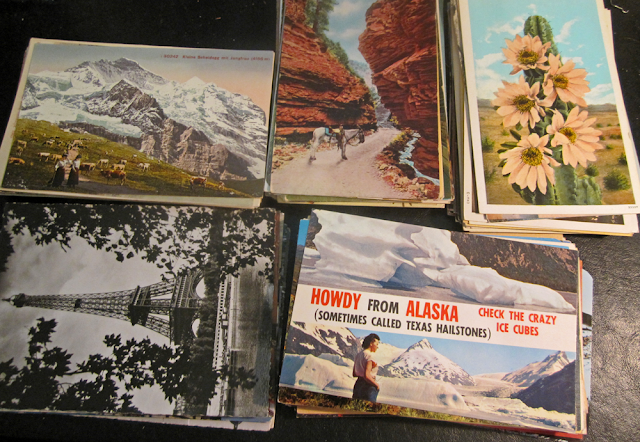 If your interested in this service, you can find out more on this Custom Vintage Post Card for Weddings Etsy listing.

My garden is blooming like crazy. You, too? I am in love with my hydrangea bush this year. It was double in size since last year and has a ton of big firework-like pink blooms. This plant started as a potted blue version from Trade Joe's. When I put it in the ground it bloomed the next summer as pink.

I've been admiring all the hydrangea bushes I've seen all around town, too. Some are quite big. When I was kid we had a blue one on the side of the house and I kind of always thought of it as a big weed. It didn't seem like a flower to me because it was a bush. Now, I see the appeal of them.

I recently got this vintage postcard from 1911 because of the hydrangea bush. Lovely! 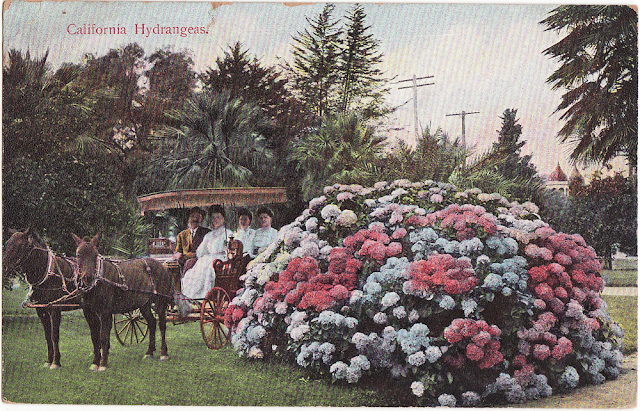 This postcard was sent in Jan 1911 from Ann in Anaheim, California to her mother in Minneapolis, Minnesota. Most likely this is the house she lived in, in fact probably where Ann lived before she moved...or maybe she is just on vacation.


I recently bought a photograph on Ebay, which I seldom do. I like double exposure photos and this one just looked too neat to pass up. It shows a typical summer day for some. 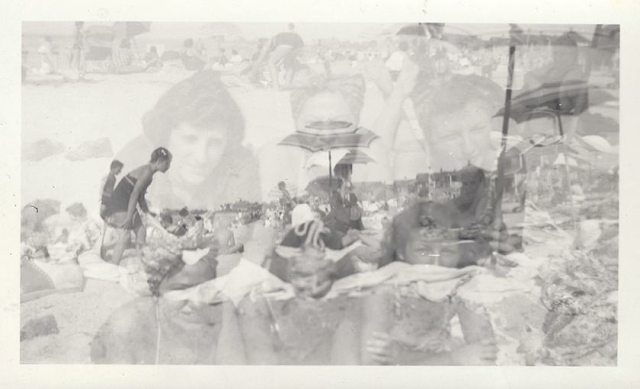 This beach looks a little too crowded for my tastes, but it sure makes a neat picture.

What are some of your favorite summer traditions? I hope you can enjoy more of them before the summer is over.

Posted by PonyBoy Press at 1:43 PM No comments:

Something new that I've noticed in the last few years is that couple's are trading traditional wedding guest books for unused vintage postcards. Most often they are used in place of guest books, but I've also seen them used as place cards and RSVP cards, too. I think it's an awesome idea and such a fun way to use vintage postcards.

A few days ago I got an email on Etsy from someone looking for vintage postcards for her wedding.  Through my postcard club I do have access to lots of postcards. She told me the regions she wants and I'm going to gather them for her.

I don't know why it never occured to me to offer this on Etsy before, but now I have a listing!

It's really just a placeholder to get people's attentions, since every order will be different. If you're looking for a large lot of vintage postcards, email or contact me on Etsy and let me know how many you need, the regions and your due date. Ideally I'd have a couple months notice to get them all together and to you.


I've started a Pinterest board with lots of vintage postcard wedding inspiration.

Here's a pretty image of vintage postcards being used as place cards.

So many things that you can do with vintage postcards! I'll leave you with this great pin from a couple who used them for their RSVP cards.

I'm so glad people are using and appreciating the vintage postcards! If you are getting married soon, Congratulations!
Posted by PonyBoy Press at 8:08 PM 1 comment:

Everyone in Portland knows (although they seem to forget each year) that summer doesn't really start here until July 5th. Although we have had many nice sunny days we also have had a record amount of rain, which I loved. A couple days of hot sun and then a couple of rain is perfect for me. But, soon it will be dry till October.

In honor of summer almost coming to Portland I wanted to share with you these neat old beach photos that I have had for a very long time. I got both of these when I was still in California, so that's over 12 years ago. 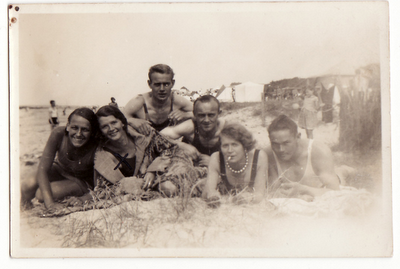 Hope you can have some time this summer to relax and enjoy the day like these people seem to be doing.

Posted by PonyBoy Press at 6:04 PM No comments: