Real Photo Postcards, or RPPC, are photos that were made into postcards. Around 1905 Kodak introduced a camera that could print out photos on a postcard back. This meant that people could send postcards of whatever they wanted.  RPPC's continued to be used into the 1950's. Some RPPCs can be very collectible because often the image was only taken or printed once. The period between 1903 and 1920 was a fertile time for postcard sending and there are many unique, surprising and sometimes mundane RPPC's out there from this time for people like me to collect.


Nowadays people rarely send postcards. And even less of them keep them for years or lifetimes. Why would you when the image is a generic shot of a skyline? It isn't like it used to be when each postcard was a little piece of personal history with a stamp on the back.

However, now with the new technologies of smart phones we can send postcards right from our phone. You can send it right after the picture's taken or while your still away on vacation. There are probably a number of apps for this purpose, but I'm gonna just mention the one I've used, Postagram. The app is free and the cost to send a postcard is $1.99 (it may be 99 cents now according to the site). You buy credits for something like $10.00 and then you have them ready to send postcards whenever you want without having to enter payment information. Make sure you pre-load your address book. I gotta say it's pretty cool.

You choose your pic from your phone and then through the app you write your message. Postagram then prints and sends the postcard out. It takes about a week depending how far you are from their processing facility.

Last month when I was at the coast I got a chance to use this feature for the first time. The second night we were there while we all watched an old movie I sent postcards of some pictures I took while laying on the beach earlier that day. I sent them to a few people including myself.

When I received the postcard there was a a QT scan on it and it said "Scan me to send a Thank You". So, I did that, too. I chose another photo from the beach and had it sent to me, too. Mainly for the purposes of this blog post, but I'm glad I have these neat souvenirs of my trip. 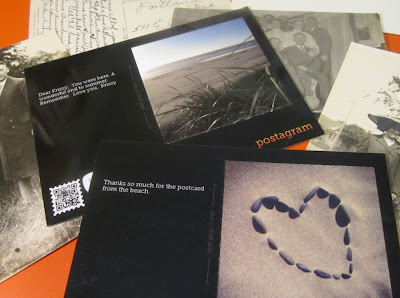 The photos come laminated and the image itself can be punched out, so you can keep just the image (the message is on the back, too). 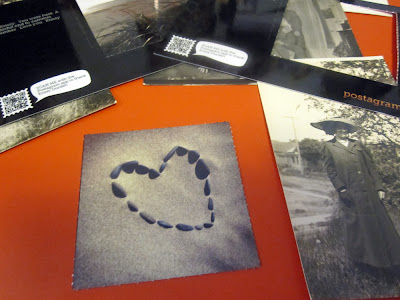 And then you can display it with all your other treasured items. 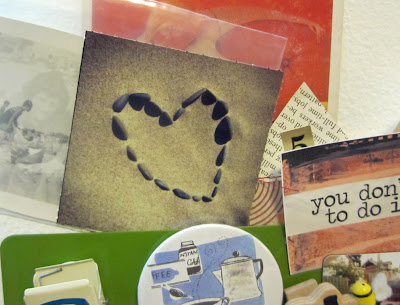 I love this idea and I hope it catches on. It's always fun to get something in the mail and it;s so easy to do once it's set up. Maybe a hundred years from now they'll be a lot of these phone postcards for people like me to collect. 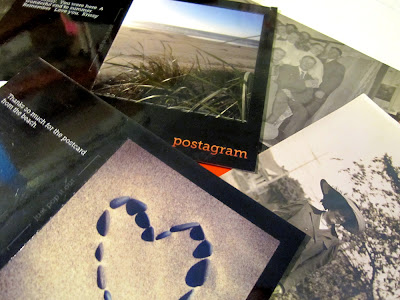 History and a Home for a Photo from my Collection 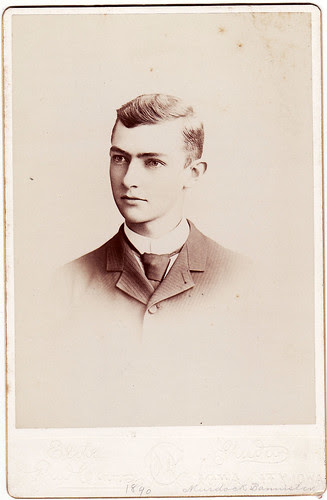 This portrait of a young man was one of the first things I posted on this blog in 2009. I've had it since I lived in California. When I was scanning it I realized that the name on the back was rather unique and so I googled it with the town and soon found out about this young doctor's family and life. You can read the original post here.

When I made the post I had uploaded the photo to Flickr. About a year and a half later I got a comment from someone who was related to him. This doctor, Murdoch Bannister, was his great grand-father.

Can you imagine finding photos of your relatives on the web? I keep expecting it to happen to me sometime.

Anyway, I responded to him in a Flickr comment and asked if he would like the photo. As I wrote about in the post a couple years ago when I sent a whole box of postcards back to the family - as much as I love these treasures I would most likely always give them up to have them be with the family again.

It took a long time between messages, but Murdoch Bannister's great grandson, Joe, and I finally connected and this portrait is going back to him and his family in Texas.

As a trade I asked Joe if I could post some of his history about Murdoch Bannister and his legacy. He sent a wonderful account. I hope you enjoy it. And I am glad to send the photo home with his family.

Dr. Bannister had a medical practice in Ottumwa, Iowa for many years; his father (Dwight) was an army colonel who served during the Civil War, and his son (also Dwight, named after his grandfather) was a newspaper publisher and the professor of large animal surgery in the veterinary department at Iowa State in Ames. Dr. Bannister's wife Keota was the daughter of Judge Morris Williams, and was one of the first woman licensed to practice law in Iowa.

It's not surprising that a picture of Murdoch Bannister ended up in California. Dr. Bannister's mom (Lavinia) was the niece of the prominent abolitionist attorney and newspaper publisher Francis Murdoch, who moved to Santa Clara County, California in 1847.

The Murdochs and the Bannisters remained close through at least the late 1960s, with cross-country trips and letters, so there was a fairly robust Iowa-California exchange between the descendants of Colonel Bannister's kids and in-laws.

My mother and aunts remember waiting in my great-grandfather's office for their dad to close up the newspaper and take them home after school. My aunts would pass the time by grossing each other out with pictures from Grandfather Bannister's medical references.
One of our bits of family history is an entertaining letter that Dr. Bannister sent to his family toward the end of his residency (around 1895).

My great-grandfather's residency had included care of patients in a hospital burn ward in Philadelphia, and the emotional toll of treating severely burned patients was evident in his description of the experience (third-degree burns were effectively a slowly enforced and torturous death sentence prior to the discovery of antibiotics and the development of skin transplants).
Dr. Bannister wrote very movingly of one of his patients, a vivacious teenage girl who had been burned over 70 percent of her body when her voluminous skirt was set ablaze by a stray kitchen spark (this would have been about five years after the date that Murdoch's picture was taken). She fought to live for a full year in almost inconceivable pain before succumbing to sepsis.

His experiences weren't all grim. He spent a lot of time socializing with his fellow doctors and medical students, and he had a sometimes witty sarcasm.

He served as an Army doctor in WWI, and he was appalled by the inhuman conditions of trench warfare. He subtly subverted the military bureaucracy by sending soldiers home at their request, by signing medical discharges from service with diagnoses of horrible-sounding diseases with long Latin names.

If anyone had bothered translating the diseases, they would have found that he was recommending honorable discharges for things like untreatable combat-related "severe chronic hangover.

If you've regularly hunted through stacks of antique pictures at vintage stores and estate sales, I'm sure you've looked at stacks and mounds of photographs of these long-dead and long-forgotten strangers.

So many are nameless and lost, staring out at us in the fullness of youth and hopefulness, that they cannot help but remind us of our own transience and fragility, and of yawning oblivion. I'm glad you found my great-grandfather, and I'm glad that I can tell you he had a good life and was well-loved, and that he is still remembered fondly.

Posted by PonyBoy Press at 5:37 PM No comments: