Happy New Year! Thanks so much for following this little blog of mine. I have really enjoyed sharing my collection on here and on Flickr and I appreciate it so much when you take a moment to comment. I am looking forward to all kinds of neat things to share in the new year.

Here are three sweet New Years wishes for you on this last day of 2009. I wish for you all that is written here. Why, hello there 2010. 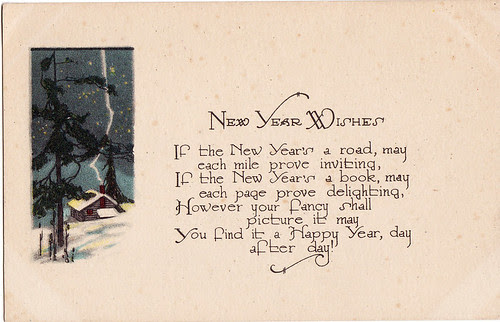 This above postcard was sent to Mrs David on South Ivanhoe St in Portland. There is no street number and no stamp or postmark. The sender wrote the date at the bottom, Jan 5th 1925. She wrote:

May Heaven Richest Blessings be yours for the coming new year. 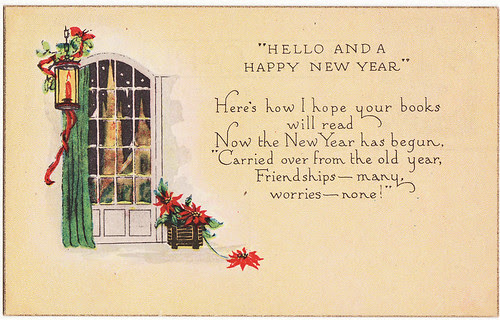 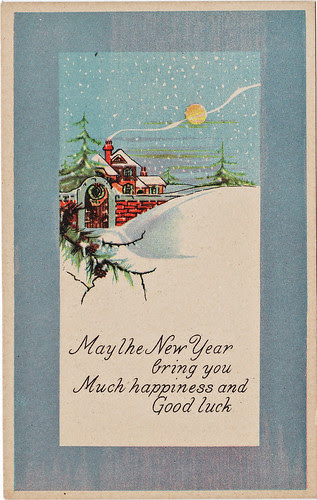 This one above says on the back.

Posted by PonyBoy Press at 2:34 PM No comments:

a very merry christmas to you

Christmas Eve is here. This year came so much faster it seems. I feel behind in my basic Christmas rituals. Right now I am watching White Christmas for the first time this season. That is weeks behind my usual viewing.

Ha! Well, no matter. It is here and it should be fun. My family does a theme Christmas every year. We have done Medieval Christmas, 1960's, Dutch, Hungarian and others. It makes each year unique. This year it is Depression Era Christmas. Soon, I need to go in my closet and find some outfit vaguely reminiscent of the 1930's. I am going for a Walton's version.

I found some great old music to play tonight, mostly from the 1930's. You can listen too if you want. You can find it here.

Here is the only Christmas item I could find in my collection from the 1930's. It is actually plastic and on the back is a calander for 1933: 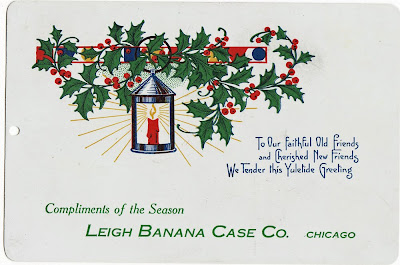 I hope you all have a wonderful Christmas. I will leave you with this last Christmas postcard from December 24th 1917. It was from Emma and Edwin to their brother Oliver in New London, Minnesota. 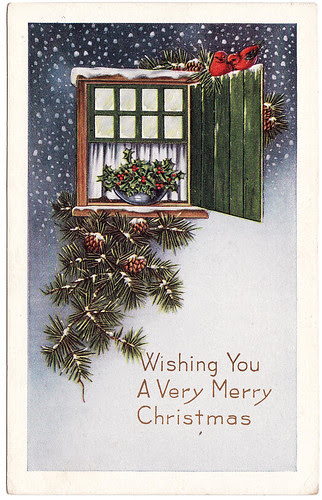 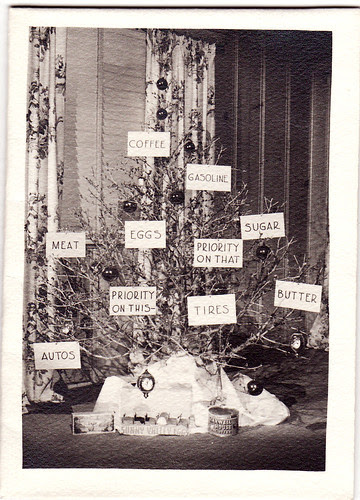 This image above is from a homemade Christmas card. It is a photograpah printed on really nice toothy thick paper. It is them folded and then folded again. When you open it it has this inside: 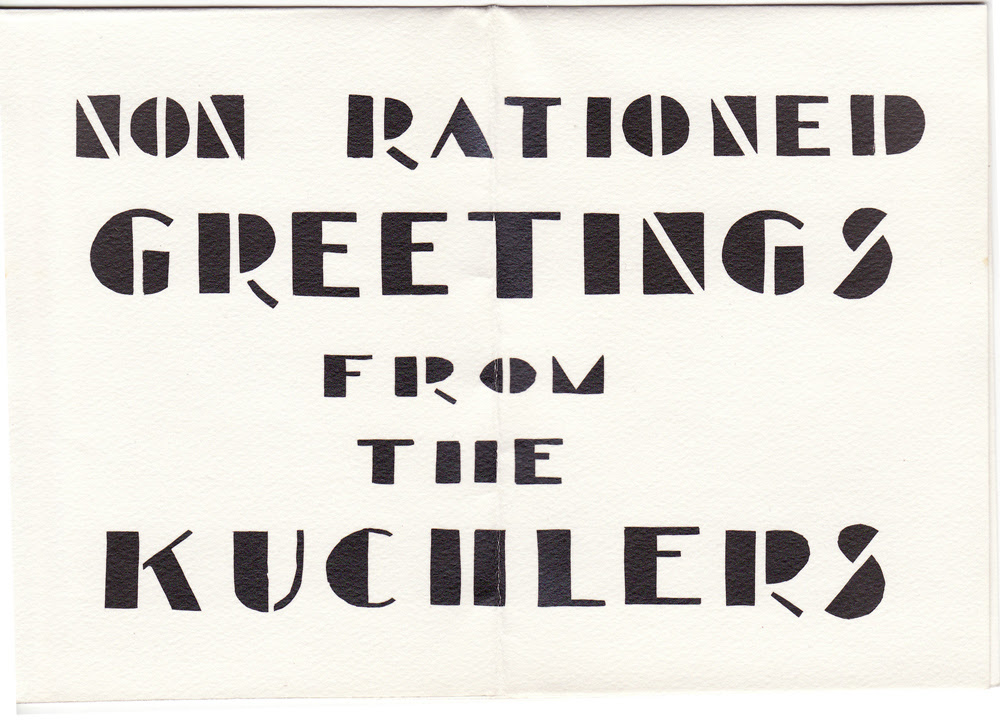 A funny Christmas card remarking on the weird world of rationing that people had to go through during World War II. It is one of my favorite finds. 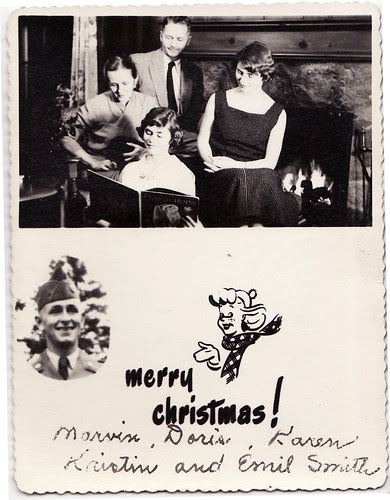 A Christmas family portrait with the soldier brother included in the corner.
Posted by PonyBoy Press at 10:57 PM No comments: 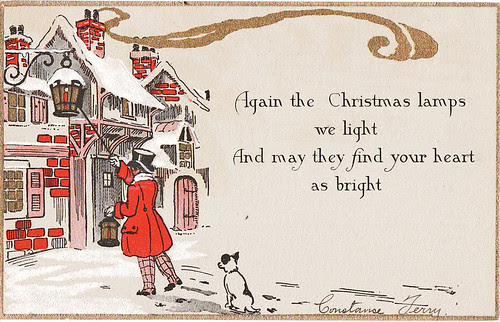 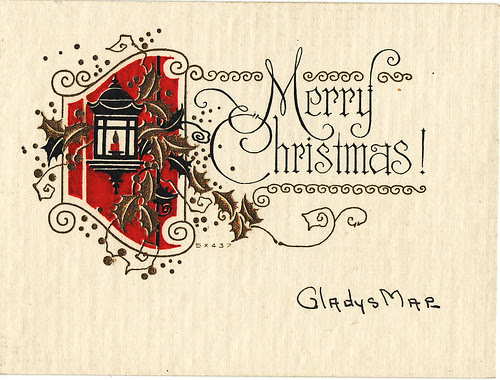 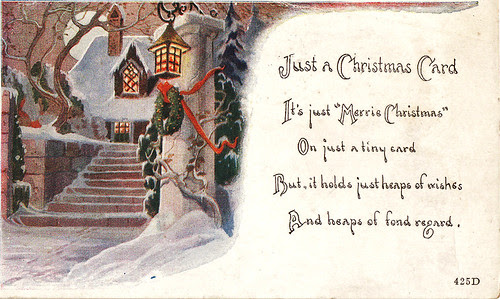 This one above was sent to Berkeley, Ca in 1920 from one sister to another. 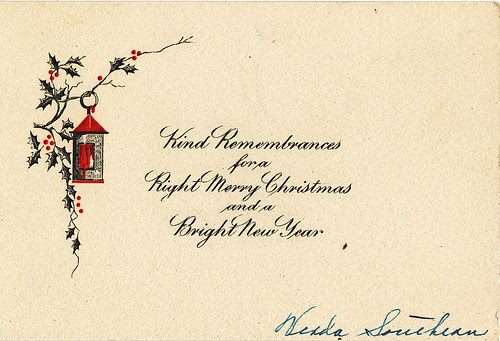 from Our House to Yours

Christmas is fast approaching and I am running out of time to post all the many Christmas postcards and photos I have. Oh, well, I guess that leaves more for next year. Just today I got a whole new handful at the Webfooters Postcard Club Meeting and Christmas Potluck.

So, I am going to ramp up the posting. Here are three.

This first one is of a quality I never see. It is incredibly beautifully done. Both of the circles are raised and the little circles around them are slightly raised, too. The paper feels more like a photo than a postcard. And, as you can see the pine boughs and berries are painted. These people had some serious money. It was printed in Britain and it says "Rotary Photographic Series". There is no postmark or date. On the back is written:

Wishing you a Merry Xmas and a Happy New year. From Ada to Grand Pa 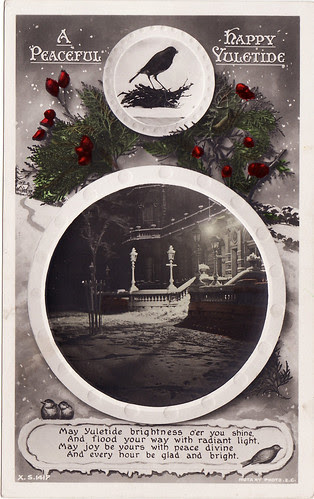 This next one has a long message on the back and it fills out the whole card, so it was not mailed as a postcard. It is doesn't have a name it is addressed to it. it just says:

Thought you might like a picture of our old family home, tho you can see it anytime....It belongs to Edward and me now. Our Howell grandparents and family came there May 14 1884 so my mother had lived there 70 years lacking 2 days when she died May 12 1954. Mamma and Aunt Frank had a private school in the parlors...Hope you are well. Florence Anne coming for Christmas, then going to Sun Valley for a week. 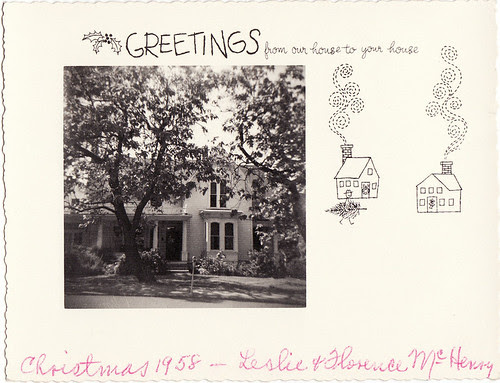 This one has no writing on the back. The trees are slightly raised. 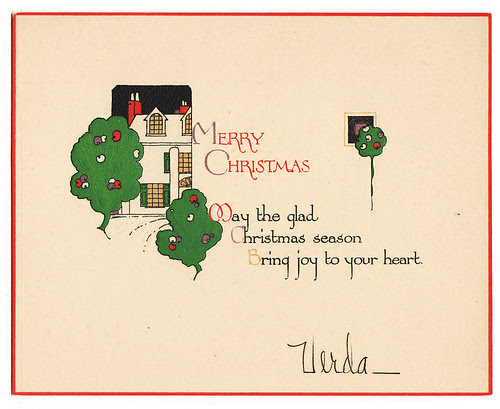 Posted by PonyBoy Press at 3:23 PM No comments:

I got about 6 of these jumbo matchbooks at the Webfooters Postcard Show last April. You may not be able to tell from the photos, but the matchbooks are 4.25" x 3.25". I had never seen anything like them before and all 6 that I got were in perfect condition with no matches missing. 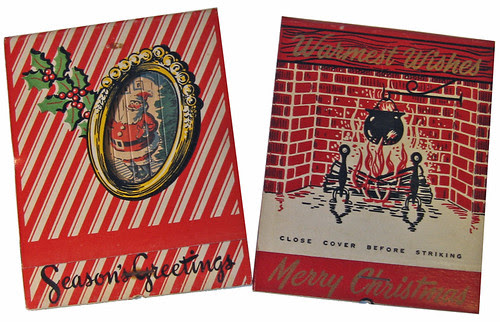 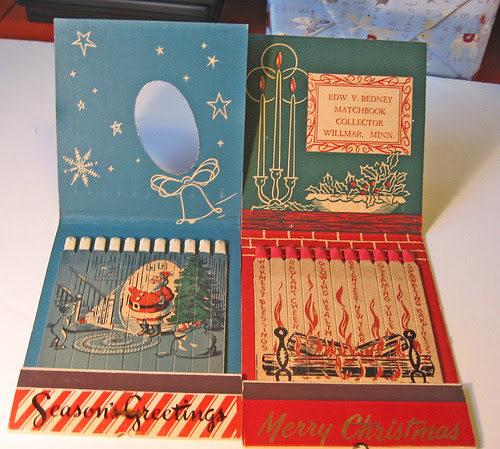 Right now I wanted to share the Christmas ones. I will post the other ones at another time. The Santa one has the name Gil Stuempel letter pressed on the back. A quick search shows me one listing for Gilbert Stuempel. He was born in 1906 and died in 1993. He lived in Southern California. 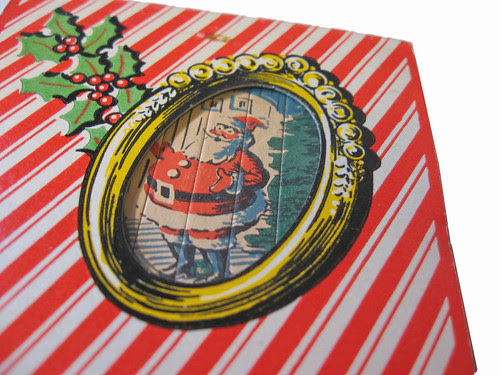 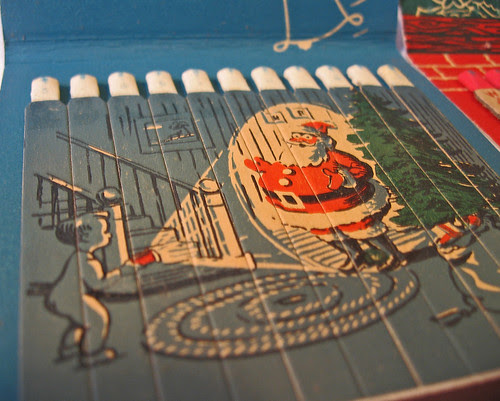 The other matchbook was given by Edward V Bedney. I love the words on each match. A search on him finds also only one result. But, this is fascinating. The result is another collector site - The Universalist Ship Cancellation site. These people collect the cancellations of maritime letters. So close to what I do, but I know nothing about it and didn't even know a group like that existed. 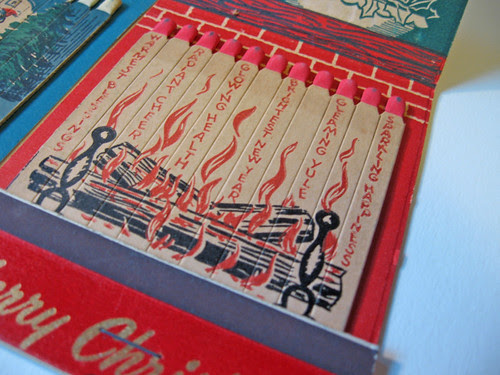 Wow, this entry took a little turn in the road. Instead of just sharing these really neat jumbo matchbooks, I have to remark on how interesting it is that this man, Edward V Bedney has lived on in history due to things that most people throw away. Although he may have died before the internet was common, he is still searchable and present because of ephemeral things and people who collect and document them. The internet is so amazing. How crazy that something he presumably sent and something her received would both be found by collectors, valued and posted online.
Posted by PonyBoy Press at 7:21 PM 5 comments:

I wish there were signatures on this card. I have decided that this family is from Southern California, due to their sleeveless outfits. I am also going to guess that this is from around 1970.

My family never did the photo Christmas cards. It is kind of curious that we didn't considering my father was a photographer. It was probably too much money.
Posted by PonyBoy Press at 5:42 PM No comments:

I am really starting to get into the Christmas mood. I always think I won't and then I do. I am in the mood to watch Holiday Inn. It is one of my favorite Christmas movies. I love watching Fred Astaire dance drunk. Holiday Inn is an inn that only opens on Holidays. As a person who cannot pass up a theme, you can see why I would be so enamored.

Here is another favorite (really, they all are favorites, I guess) card from 1905. Published by Chas Scribner's Sons. 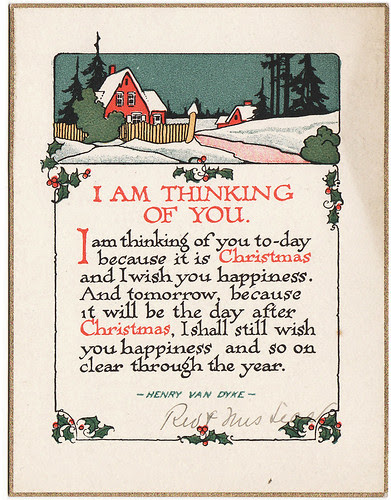 Posted by PonyBoy Press at 6:54 PM No comments:

I am so excited that it is Christmas and I can share all my Christmas postcards with you. Vintage Christmas cards are one of the things I gravitate toward and I have more than a few. I think I like Christmas images so much because they are always so cozy. And cozy is one of my favorite things. Also, many Holiday postcards use some of my favorite images in artwork: houses (lit from within with smoke coming from the chimney), snow covered hills, trees, pinecones and lanterns.

Vintage postcards often have the sweetest messages on them, the kind that they don't have anymore. I also have a small collection of found Christmas photos. I look forward to showing you those, too.

I have to get busy to get all this in before Christmas is over!

My first choice is this sweet and "ernest" card from the 20's. The moon is metallic gold. It is hard to see that in the scan. The choice of just the reds and the gold is so nice and that lantern just makes it perfect. 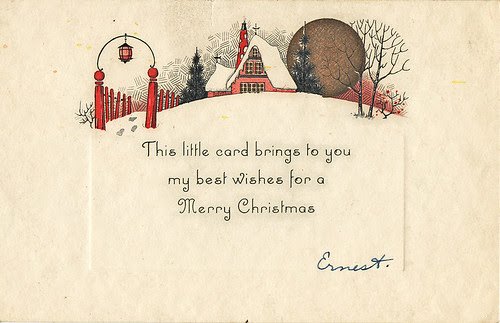