I don't have any April Fools Day cards. This is probably the closest thing I have.

I got this postcard from a wonderful guy named Al who is almost 90 years old and was one of the first members of The Webfooters Postcard Club.

This was sent in 1908, on April 8th. Looks like the fellow who sent it was playing some shows out of town.

This top part fold down and reveals her..... 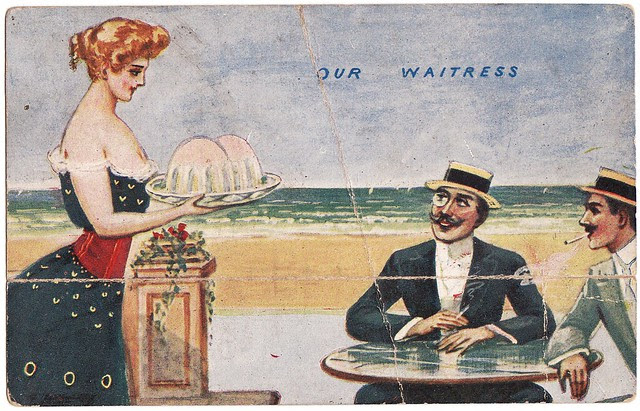 ...I don't even know. What is that? Some pale gelatin? Is that what aspic is? Ostrich eggs? Well, no matter. I'm sure it was rather naughty for some at the time. 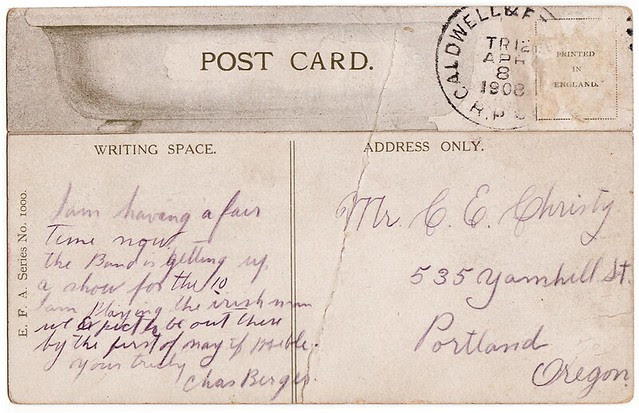 This is the other side. Maybe it was sent open and then the person who received it, folded it. It looks like the fold was scored already. But, it doesn't say anywhere on it, "fold here". So, based on that I am now deciding that it was sent folded and the post office just had to straighten it out to stamp it.

Today is Postcard Friendship Friday. You can see more postcard blogs who participate at the blog The Best Hearts are Crunchy. Beth does a post there about April Fools Day and the connection of that day to fish. This is the first time I have ever heard of this, but she's got the postcards to prove it. Check it out.

People often ask me at Vintage shows what I collect and I can never answer since so much of what I collect is just based on if I like it. But, one thing I can say that I do collect is photos of the inside of people's houses.

I love finding vintage photos of interiors of houses with no one in the picture. It is kind of rare. I mean have you ever taken a picture of your living room or bedroom with no one in it? Most people haven't. I recommend it. I would love to have pictures of the house I grew up in now. Especially my bedroom, where no photos of people were ever taken. I got these recently at the last Webfooters club meeting. This one below looks like maybe from the early 1940's? I'm not sure, but I love the plants and the wicker. Looks like a magazine layout. 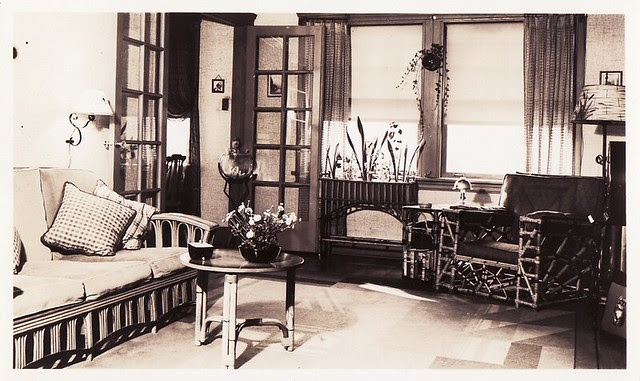 This one is most likely from the early 1900's. I love find photos like this that show the way people showed off the photos and postcards that I now collect. This looks like it may be the bedroom. 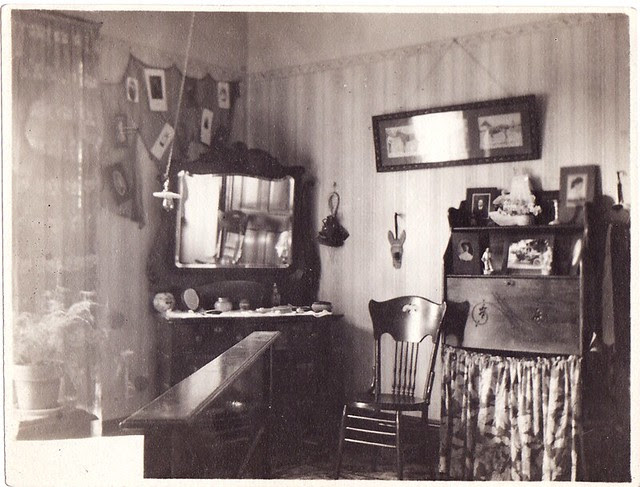 I think I'll start a pinterest board for vintage interiors. Check out my boards if that interests you.
Posted by PonyBoy Press at 2:50 PM No comments:

Souvenirs from a Sailors Holiday 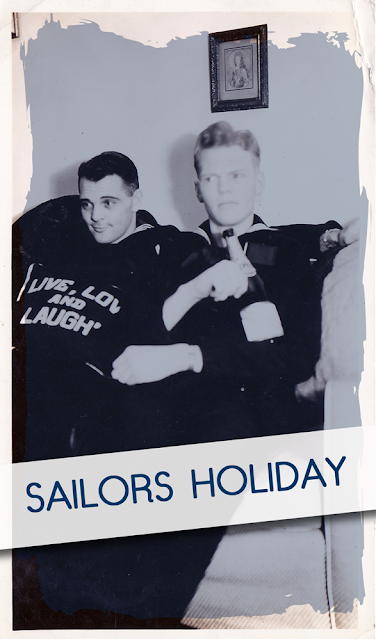 I have a number of photos to share with you today. These are all photos that a sailor sent home to his sweetheart with writing on the back telling him about the places he was and who he was with. Below are the images and a selection of something he wrote on the back. It's a find collection and a neat glimpse into another time.

These are for sale as a lot on The Cedar Chest . 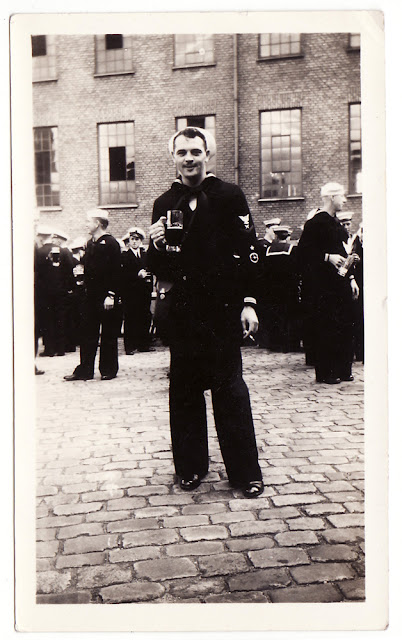 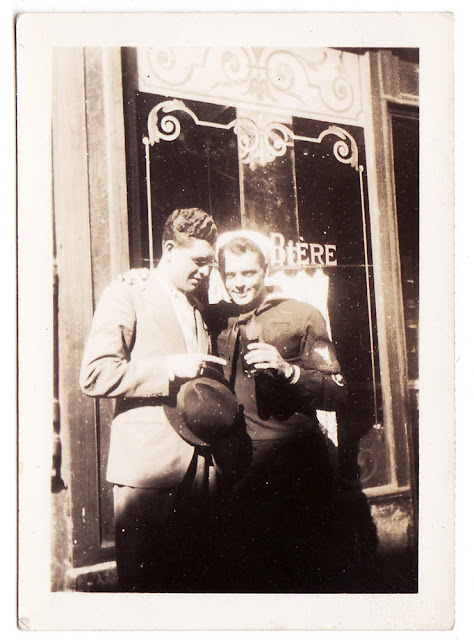 This fellow spoke 8 languages and acted as our guide in seeing Parisian night life.....This glass contains vin blanc or white wine and is my fifth - doing okay, huh? 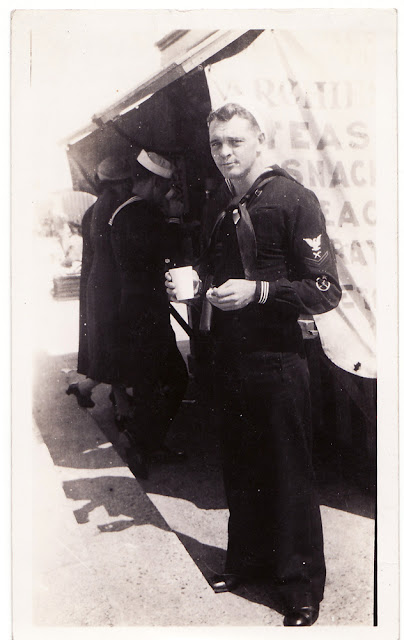 Believe it or not, darling, this is milk I'm drinking... 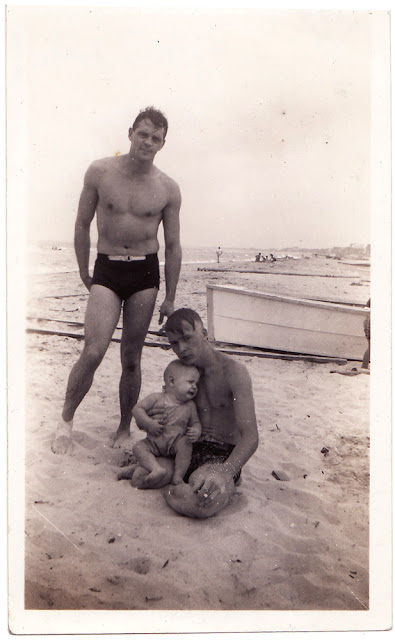 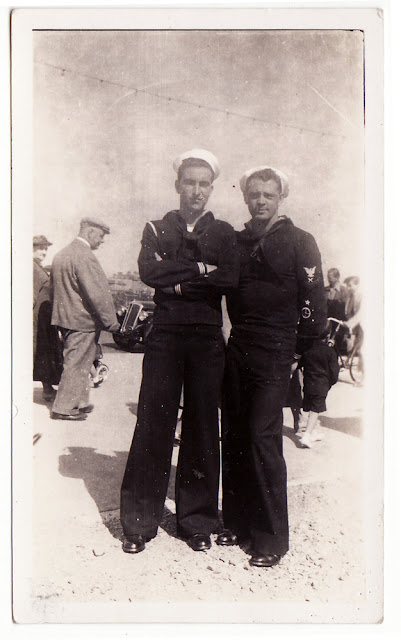 This is Sullivan...snapped at South Seas Parade Pier in Portsmouth England this summer.

The box that holds all my for sale items for The Cedar Chest is overflowing. It's time to move some items out and I'd love your help in doing that. Please take a look at what's on sale. I hope you find a great deal on something you love. Thank you!

Posted by PonyBoy Press at 2:38 PM No comments: 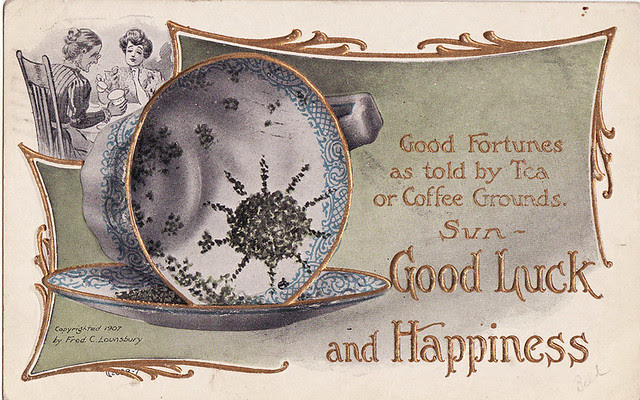 I have never seen another postcard in this tea leaf reading series, but I haven't looked too hard. I think I will try harder in the future. I think it's a neat idea and I love anything about tea. Well, not anything, I am picky about the images and tea I like, but I am a fan, for sure. As evidence by my tea inspired Pinterest board.

The postcard above was sent Kansas on Aug 27th, 1908. It was sent to a Mrs Ira Hicks in Los Angeles from a woman named Belle.  Mrs Ira Hicks noted on the top with a pencil that she responded on Sept 13th. 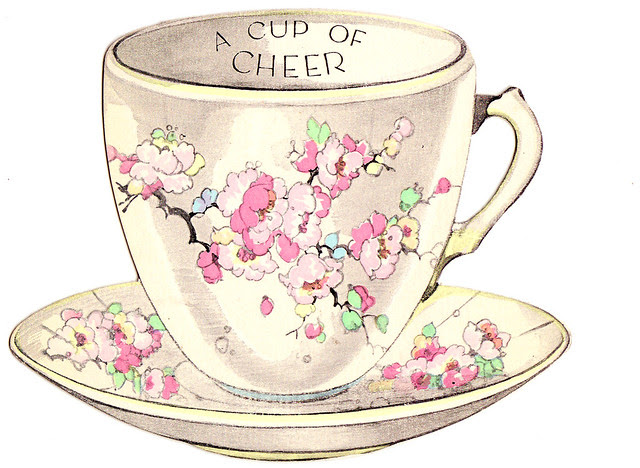 This sweet card above opens up and has a lovely friendly poem inside and is signed by Mabel Mallory.

Today is Postcard Friendship Friday. You can go to the host blog The Best Hearts are Crunchy and visit other postcard blogs participating.