let's get a treat 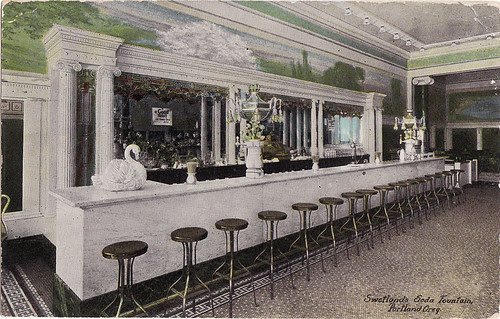 I would so love to go to this Soda Fountain in Portland. Unfortunately, it's long gone. I would like someone in Portland to make a sweet pretty place like this ( no more 50's style diners, please) where we can get green river sodas and malts with extra malt.
This soda fountain postcard was sent April 9th, 1914 to Mrs William Forest in Fairview, OR. It was sent by Lizzie and she started the note off with "Sisters".
Lizzie was taking care of some people who had the measles. The people with the measles lived at 1279 E Yamhill. The exact house number is not there. It could be gone or renumbered. There are some old houses in that neighborhood. 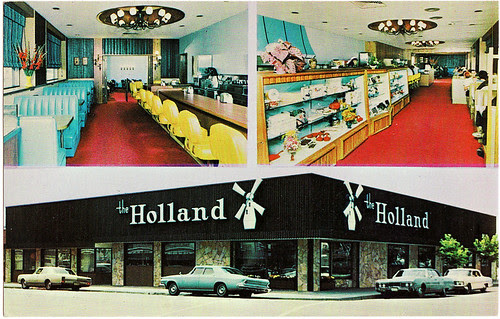 The Holland Restaurant is another lost restaurant I totally want to go. I see these postcards pretty regularly. The Holland was a pretty popular place from what I gather and I think there were more than one. The last one closed in 2001. It was in Vancouver.
The people behind the Holland are the same people who own the Burgerville Fast Food local chain. Which, by the way, is the best fast food ever. So, good, lots of quality, local foods and good vegetarian options.
Here's some good info about The Holland / Burgerville history:

In 1922, Jacob Propstra, a Dutch immigrant who had moved to the United States in 1912, and shortly thereafter took a job at the Old Imperial Creamery in Portland, founded the Holland Creamery in downtown Vancouver, Washington. The butter and egg business evolved into the Holland Butter and Ice Cream Co., and when Sunday visitors stopped by to sample the product, Propstra added cones. In 1928, the business moved to another nearby location. Propstra put in tables and chairs, and, in 1933, he began to offer cheese sandwiches at the newly expanded Holland Restaurant. The average per customer sale at the time added up to about 11 cents.

In 1935, shortly after the restaurant began to offer sandwiches, George Propstra, Jacob's son, who was three months short of completing a college business degree, joined his father in the family business. George Propstra had started out scooping ice cream, washing cans, and wrapping butter as a boy, along with his two brothers--all "part and parcel of being in one of those dairy families," as he described it in a 1982 Oregonian article.

In 1956, Jacob Propstra retired and George Propstra assumed control of the business and "realized that the butter, egg, and ice cream businesses were all to be dominated by big outfits. ... We finally saw the handwriting on the wall," he was quoted as saying in the Oregonian. "[A]t the time, we were a one-horse operation." However, there was room to grow in the restaurant business. "We had had a taste of the restaurant business and could see it was a small man's business. You could grow slowly and carefully, opening one restaurant at a time." In 1957, The Holland added a $30,000 bakery addition, located in the restaurant building; the bakery sold Danish and French pastries and all types of cakes. (info from here)

I could really go for a lime soda and a danish pastry.

The Rose Festival is going on here in Portland. Not one for groups of 350,000 people, I prefer to watch the Starlight Parade and the Rose Parade on TV. But, I do like parades. Sometime I would like to go to a small town parade like the one here.
These pictures were taken July 22, 1979 during "Old Homesteaders Days" in Osborn, Montana. Each photo says this along with a short description on the back. I got these a couple years ago from a fellow Webfooter. 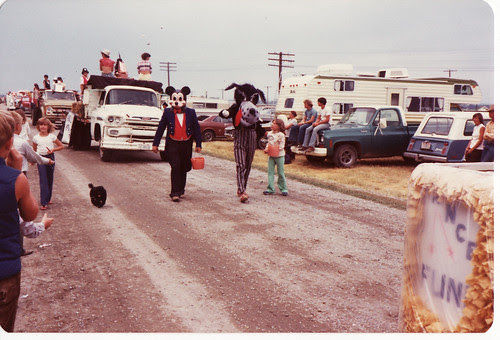 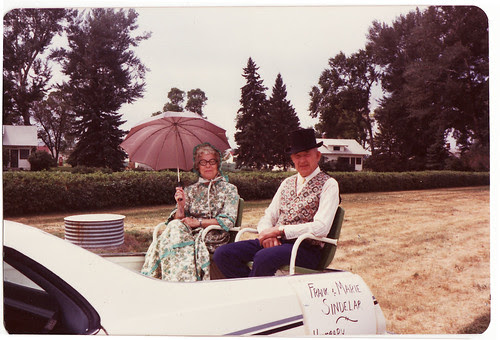 On the back: Marie and Frank Sinclair as Grand Marshalls 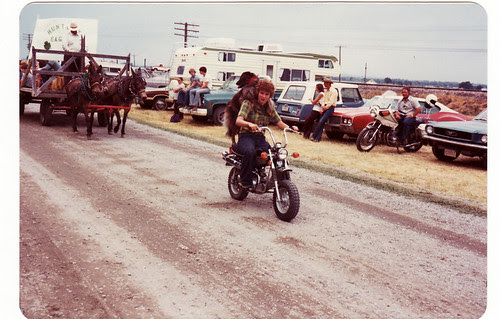 On the back: Dog holding on to mistresses back
Posted by PonyBoy Press at 4:45 PM 1 comment: