The Rose Festival is going on right now in Portland. Although I really don't take part in it, I have a fondness for it. I like things that are unique to cities. Especially my adopted city, of course.

I thought this would be a good time to post a couple Rose Festival related items I have collected. These photos are from the mid-Fifities and they came in a full album. I bought the album at an Antique store on the Oregon Coast about 8 years ago.

You can see the banner on the hat of the man, it says Rosarian. I love the Rosarians. They were marching in the Starlight Parade last night. Below is the text from their website.

The Royal Rosarians are the official greeters and ambassadors of goodwill for the City of Portland, Oregon. Royal Rosarians welcome visiting dignitaries from around the world, host hundreds of out-of-town visitors, march in parades throughout the region, and perform ceremonial rose plantings in honor of worthy individuals both in Portland and during Rosarian ambassadorial trips to distant cities throughout the world. Organized in 1912, the Royal Rosarians are a non-profit, civic organization. All services rendered by its members are gratuitous.

I don't know for sure that these pictures were taken during The Rose Festival, but let's just say they were. They are planting rose bushes. I love that the boy is dressed like a Rosarian. 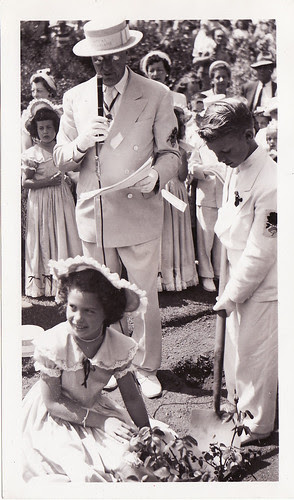 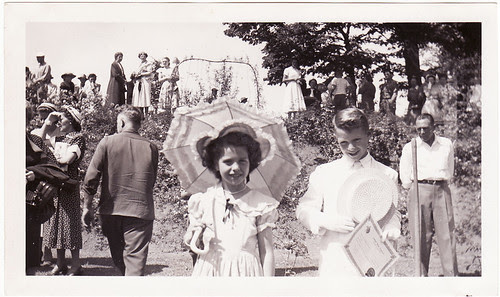 And here is a postcard I got only a few months ago at a Postcard Club meeting. 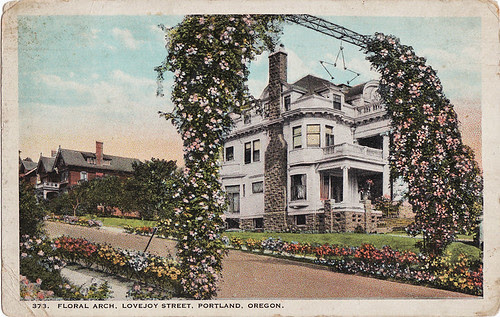 It was sent to Vincennes, Indiana and is written in pencil. Some is hard to read.

Dear Clarence and Darvell (not sure about last name),

We came to Portland with Em and Will in car...to see the Rose Festival Parade at 2:30 pm. It is now 1pm. You've never seen such a crowd, the city is packed. 5th grade kids selling boxes for seats on side walk to the highest bidder. Such fun. We leave tonight 11:30pm for Seattle, stay 2 days, then Spokane. I should love to hear from you, but will see you soon.

Posted by PonyBoy Press at 6:07 PM