I was just recently having a discussion with someone about how there seemed to be a trend in the late 40's to late 50's of people putting their name in quotes. I think it was supposed to be their nickname, like Bob "Mitch" Mitchell or something like that. Sometimes you see that on gravestones. It make sense, people didn't know him as Bob, you have to put the "Mitch" in. But, the quote part of it seemed to very trendy for a while. I have seen my Mother's signature in her high school and college days as "Judi". She often put the quotes around it.

I got this photo at an Estate Sale at a house in the Hollywood District here in Portland about 4 years ago. 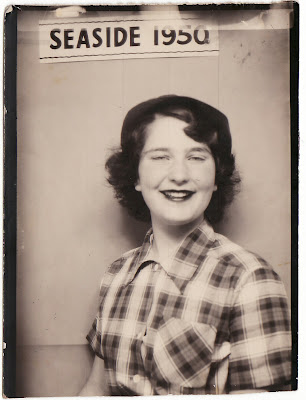 Seaside and Cannon Beach are towns on the coast, a couple of hours away. I love the idea of there being this photo booth where all the girls got their pictures taken and then they all signed them. You can almost hear the talking and laughter as they passed them around.

The signatures are hard to read now, but all the girls made sure to put quotes around their names. 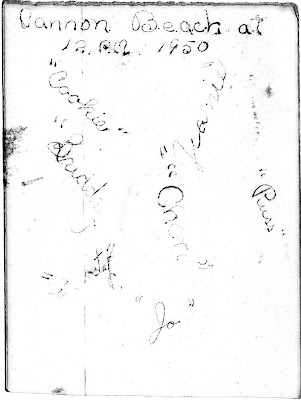