In the 19th century everyone of any social standing had a card with their name printed on it usually with some decorative element added. These were called Calling Cards and were an important part of introducing oneself and fostering friendships.

If you lived back then you might come back from a day out and there would be a small pile of calling cards on your entryway table from all the people who had come by to see you that day. After a dinner party or a ball it was customary for folks who attended to come by the next day and leave their card.

I can easily imagine how exciting it must have been to go to the printers and choose the font and emblem that you would want for your cards. What you chose was a key way of showing everyone who you were and I'm sure it was taken quite seriously. 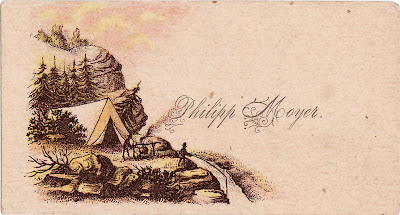 When wax-resist color printing known as chromolithography became available for the masses, around 1880, calling cards could then be made in bright and many hued colors. On the more lavish cards it took over a dozen steps to print all the colors.

A popular and fun type of calling card was the hidden name cards. Cards would be printed with the name and often cut into fancy shapes and a color decorative paper (now often called Victorian Scrap) was laid over and glued on one end. The result was that the recipient had to lift the decorative cover to see who had visited. I would assume this also served as a nice privacy screen for anyone who happens to be walking by your entryway table. (There is a set of these currently for sale in the shop) 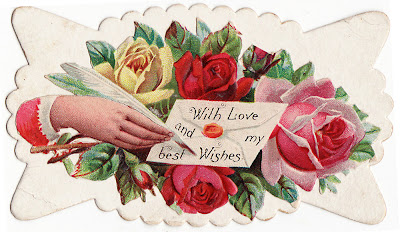 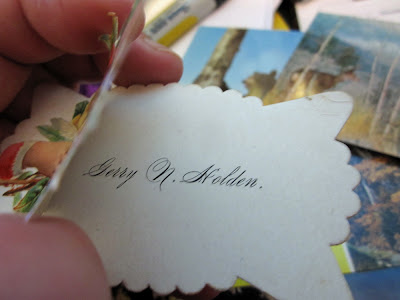 Calling cards had a full set of rituals and sub-genres. One thing I like is that there were secret messages that you could convey by folding different corners of the cards. Some cards were specifically made so that a different design would appear if the corner was folded.

I kind of miss the days of the calling cards. I remember when my grandparents moved to Arizona in the 1970's there was this little holder on the wall outside their house. I asked what it was and my grandmother said it was for people to put their calling cards or business cards into. That was the first I had heard of something like that and I found it fascinating.

I guess business cards aren't really that different. But, they are seldom worth keeping. But, as you can imagine with me -  if you give me your business card and it's pretty enough I will keep it for a long time.

Posted by PonyBoy Press at 5:00 PM